Jon Shifrin is a writer whose political commentary and short stories have appeared in various newspapers and literary journals. He also is the founder of the Daily Dissident (www.dailydissident.com), a popular current events magazine. He lives in Washington, DC. 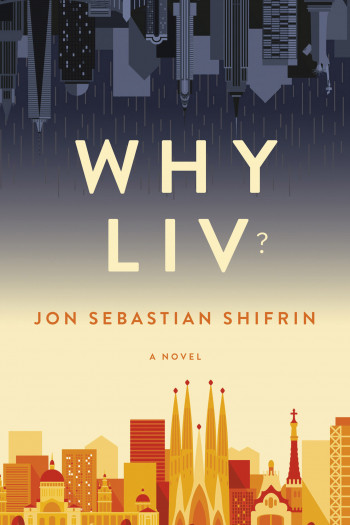 Livingstone Mordicai Ackerman—Liv, to his friends—leads an enviable life. The twenty-something works a corporate job in Manhattan, has doctor-in-training girlfriend, and maintains a wide social circle. He personifies success. Yet all is not as it seems. Liv’s job is a tedious, soul-gutting slog replete with toxic office politics and his girlfriend a vacuous, image-conscious snob. His pathologically narcissistic parents, meanwhile, are constant irritants. Add to this a febrile political climate dominated by a reactionary group, the Patriot Posse. Its angry members, menaced by humiliation, real and imagined, converge on major cities coast-to-coast, including New York. More ominous still, their leader, a mendacious radio personality with outlandish hair and catchy campaign slogan to “Make America Great Again,” is a presidential candidate—and he’s winning! How does one maintain a sense of dignity and worth in such a cynical environment devoid of humanity and hope? One cannot, which is why Liv, overwhelmed by the falseness and vacuity of the zeitgeist, quits his job, dumps his girlfriend, and heads for Spain, where he hopes to answer the existential question from which the novel gets its title. Told with humor, charm, and wit, Why Liv? attempts to explain why modern work is so devoid of purpose and why reactionary politics is so alluring in America. But most of all, it humbly attempts to offer a reason to persevere in these difficult times.

Book Bubbles from Why Liv?

Most Jobs are Pointless

When unemployment in the United States may be on par with that during the Depression may be an odd time to question the value of most jobs. Yet, an inescapable truth, felt by many salaried workers, is that jobs may be a means to put bread on the table but are hardly necessary in a broader sense that they have no real importance or true function. They need not exist. This is made clear during the pandemic, which has shown who the "essential" workers really are and are not. Most of us don't have such jobs, which, ironically, tend to be low paying. Something is dramatically wrong.

Go to a museum and you'll see the work created by artists whose genius oftentimes was not recognized in their lifetimes. There's something vindicating about seeing the work, as it suggests that those with creative talent eventually will be recognized and earn their place at the Metropolitan Museum of Art or Louvre. Not really. For every Van Goth, discovered posthumously, how many others with his talent go unrecognized and are lost to history? Probably many.

With so-called patriots defending the right of businesses to open during the pandemic, potentially putting themselves and everyone else in mortal danger, it's perhaps a good time to reflect on the patron saint of right-wing lunacy, Ayn Rand. In Rand's conceit, the world is split into two groups, the "makers," the entrepreneurial ubermenschen, and the rest of us losers, the "takers." That's a bit reductive, but not excessively so. You can guess on which side nearly everyone who is smitten by Rand places themselves. Anyway, Liv, the protagonist of Why Liv?, has his own encounters with the Randians, or Comitans. Some things never change.

During this surreal period when all of us (let's hope) are indoors and away from our jobs, it's easy to become nostalgic about our regular routine, including work. Yet many are professionally dissatisfied for one reason or another, with obnoxious colleagues a prime culprit. Meet Marcy, a bright, if insufferable high-flyer who features prominent in Why Liv?, a coming-of-age story in the Age of Trump. She's likely familiar to many.

During these difficult times when mortality is on our minds may prompt many of to ask some basic questions, including the most basic one of all: What is life's purpose? The pursuit of happiness may be one reasonable answer, but it may well be wrong. Happiness is ephemeral. Achieving a sense of meaning is what really matters. That is, that which provides meaning, including activities that may not bring much happiness in the moment, are what bring a deep sense of fulfillment and completeness to life.

The Leadership we Don't Need

Great peril requires great leadership. Fortunately, the likes of Lincoln and Roosevelt have been firm hands on the tiller during times of enormous peril in this country. But not always. Hoover comes to mind in this regard. And now we've got an Edward Schmidt-like leader in the midst of a crisis. How did this happen? And can we right the ship before it's too late?

We're facing at least two crises at present: one that takes the form of a pandemic, the other, lousy leadership. The latter, needless to say, exacerbates the former. We should've expected as much. After all, look who we elected to lead this country, a bloviating conman, Edward Schmidt. Edward Schmidt? Yes, the huckster from Central Casting who promised to make the country great again won the election.