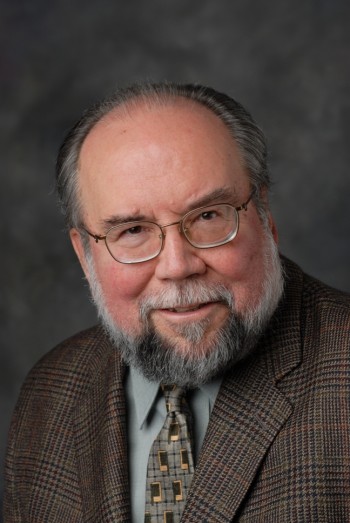 James M. (Jim) Flammang has been an independent journalist, writer and author for his entire adult life. Covering the automobile business for three decades, he has contributed countless reviews and articles to such publications as CarsDirect, autoMedia, and Kelley Blue Book. Major outlets also have included Consumer Guide, J.D. Power, cars.com, and the Chicago Tribune newspaper. His own publication, Tirekicking Today, began as a printed newsletter and has been online (tirekick.com) since 1995. Early in 2017, the site was refocused. Instead of cars, it now covers such areas as work/labor, politics, and consumer concerns. Flammang has had 30 books published, mostly on automotive history, but including six childrens' titles. TK Press, established in 2014, has already published three books: "Mr. Maurice Knows It All ... and tells you so," the "Tirekicking Used Car Buyer's Guide," and "Incompetent: Coming up short in a world of achievement." Next will be "Absurdities: Logical lapses in everyday life and thought," followed by "Untied Knots" (short stories). Upcoming titles include: "Hotel Life," "Work Hurts," and "Fraidy-Cat." Flammang is a member of the Freelancers Union, International Motor Press Association, and Midwest Automotive Media Association (past president). He and his wife/editor, Marianne, live in the Chicago area. 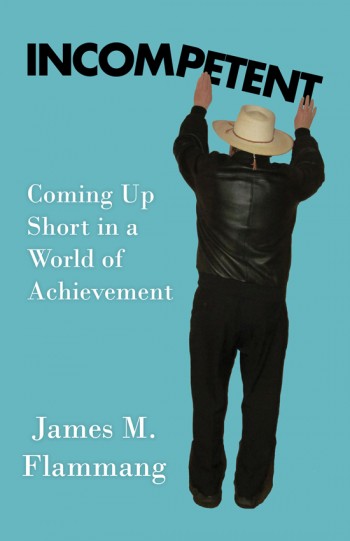 Some of us can do practically anything. Others are good at a few things, and adequate in many. A third group succeeds at several endeavors, while faltering elsewhere. Then come the rest of us – proven incompetents who get scant attention from the achievers of the world. But wait. Everybody has some kind of ability -- something they do well. Don’t they? Sorry. Some of us never tackle any task with a degree of skill beyond minimal. No one will ever say: “Remember him? He was really good at so-and-so.” Whether you’re one of us, or you doubt that utterly inept humans exist, "Incompetent" describes what it’s like to fall way short in a world of achievers. Not just to fail repeatedly; but, often as not, to do so spectacularly. Veteran journalist/author James M. Flammang surveys 34 types of sheer incompetence, from sports and work, to business and romance, to small talk and having fun.

This particular sport deserves a chapter all its own in our annals of Incompetence. Why? Because it’s the one and only physical activity – apart from a brief stab at race walking – in which I ever attained a minimal level of proficiency. Not much, to be sure; but compared to the results of all other sporting attempts, my skating efforts were practically Olympian-level.

Money was never a driving force in my life. Never did I yearn for wealth. Why, then, have I spent so much time worrying about money. How many distressing hours have been wasted, brooding about my diminishing bank account? Or especially, whether next year, next month, my income might shrink toward zero, if not grind to a complete halt. Would I become destitute at some point in the near-future, living in a dumpster or on the street? But why so anxious? My wife and I have led a simple life, by choice. We covet nothing. Rarely have I experienced a compelling desire to possess anything that money could buy. Living with little money is nothing to fear, if there’s little that you want. Yet, that nagging sense of suddenly having nothing lingers on, tarnishing each day’s pleasure.

In a world based largely upon business, those who fail at entrepreneurship occupy a special place in the hierarchy of incompetence. In each of our commercial endeavors, we’re inclined to incur more losses than profits – if not suffer a total lack of the latter. Looking at business success (and lack of same), we’re not talking merely about formalized ventures. No less notable are the various negotiations, or “deals,” that run through most of our lives. Others can look back upon their lives, pointing out a succession of victories, both little and large. For us, the incompetents, it’s a rare day when our personal bottom line reveals even a twinge of black ink. In keeping track, red is our familiar color. Just as hints of a successful business career in adulthood can often be observed in youngsters, we incompetents tend to stand out early in life, for our failures. Yet, even those rare accomplishments are typically accompanied by a setback, a humiliation, a bit of unforeseen baggage to be dealt with afterward. Some of us learn to take a perverse pride in our inept attempts at cracking the business code. Others strive to keep those shortcomings hidden. After all, who wants to be known as the guy or gal who never “made it” in economic life?

Sports: Incompetents on the playing field

“Butterfingers!” Every athletic incompetent who’s participated in a sport that involves a ball has probably heard that shrill allegation. It’s expressed loudly, by one’s peers on the playing field, after the ball has slipped past the hapless player’s grip. Chances are, that cry – or one that’s similar in nature and tone – was accompanied by a rude, derogatory epithet or two, just in case the point wasn’t fully understood at once. Before long, those who lacked talent, yet were tempted to play, would feel the subtle sting of discontent from their fellows. First off, they’d be among the last chosen out of the total group, by a team leader. Then, team members would be assigned positions: first base, shortstop, center field. Players known or presumed to be e specially inept might find themselves assigned to what sounded like a new position on the field: Left Out. Hint: “Out” did not stand for outfield. Singer Janis Ian described the phenomenon especially cogently in the lyrics to her 1975 ballad, Seventeen, recalling the pain of inevitably being one of “those whose names were never called when choosing sides for basketball.” 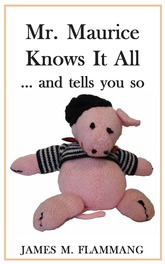 Mr. Maurice Knows It All ... and tells you so

Observations on society and major issues of the day from a stuffed pig who just happens to know everything. Written with the assistance of his longtime collaborator and companion, veteran author/journalist James M. Flammang, Mr. M. conveys his clever and profound thoughts in 78 concise, single-topic chapters. Never at a loss for words, Mr. Maurice unleashes his acerbic, witty, and delightfully wise opinions about everything from work to politics, ambition to fine dining, TV to dignity, movies to liberty, and law to the opposite sex. (Delicately stated, of course, since Mr. M. is a civilized gentlepig, crafted in London but proudly expressing his French heritage.). Whether the subject is personal behavior and etiquette, cultural trends and social issues, or matters of global and cosmic importance, Mr. Maurice stands ready to deliver his penetrating, sharply-honed, sophisticated comments.

Book Bubbles from Mr. Maurice Knows It All ... and tells you so

Maurice himself eventually requested the “Mr.” prefix, to better convey the dignity and value of his many assertions. He pondered other titles: professor, doctor, potentate. But he rejected each as being excessive. Despite his incredible intelligence and philosophical excellence, not to mention his total self-absorption, he is underneath it all a modest pig.

Who Is Mr. Maurice?

That’s a tricky question to answer, considering that Mr. M. is not – in the usual sense of the word – alive. This is a matter of some delicacy. To his many friends and even greater circle of admirers, Mr. Maurice is far more alive than many – perhaps most – humans of their acquaintance. Simply put, he is a stuffed pig who just happens to know everything. And who, because of his surprising ability to talk, is never at a loss for valuable words about any subject. His agile, massive mind serves as a blazing repository of wit and wisdom, eager to utter acerbic, erudite comments and opinions on just about every aspect of modern life.

Little time passed in his new home in the U.S. before it became evident that Maurice – so named by his British creators – was no ordinary pig, stuffed or otherwise. Soon, he began to talk. And talk, and talk. There seemed no end to his opinions on virtually any topic. Soon, too, it was obvious that Maurice’s perspectives and explanations were invariably correct and on-target. Again and again, his penetrating intellect, his pointed wit, proved to be unmatched in either the porcine or human world.

Where Did Mr. Maurice Come From?

A mere glance at his photo reveals Mr. Maurice’s French heritage, but he was actually born – or more precisely, knitted – in London, England. Created by two elderly ladies, Mr. M. was purchased at a fair by an expatriate American. He came to the U.S. as a gift from that lady to her sister and brother-in-law, a married couple who had long been drawn to pigs of every persuasion. How could they resist that soft, rosy-tinged pelt, that jaunty beret, the boldly-striped pullover shirt that lends an air of mysterious deeds, that elegantly-shaped tail. This was clearly a pig among pigs, as it were.

A Youthful Pig, with the Wisdom of Age

I first met Mr. Maurice when he was a youngster, arriving on U.S. shores with the eagerness of any first-time visitor. Actually, he was already 25 years old – and is still 25 years old. In fact, he intends to always be 25. After all, he often says, if you determine that 25 is the ideal age, why would you not make yourself exactly that for your entire existence on earth? As it happens, Mr. M. is disinclined to write, because that sounds like work – an activity he invariably wishes to avoid. Fortunately, his friend, companion and admirer, journalist James M. Flammang, took on the task of transcribing Mr. Maurice’s many observations, speculations, and endless words of wisdom.

Three Steps to Success with Bublish