Bettye Kearse, a descendant of a slave and President James Madison, is a writer and retired pediatrician living in Santa Fe, NM. Her commentary “Our Family Tree Searches for Branches” appeared in the Boston Herald. “Destination Jim Crow,” a personal narrative published in the fall 2013 issue of River Teeth, was listed as a notable essay in The Best American Essays 2014 and nominated for the 2015 Pushcart Prize. In March 2020, TIME Magazine published her article "I Feared My Enslaved Ancestors Had Been Dishonored in Death." Her essays "Slavery on Wall Street" and "America's Hidden Stories: The Other Madisons" appeared in May 2020 issues of Image Makers and Influencers Magazine. She is the author of the memoir, The Other Madisons: The Lost History of A President's Black Family (Houghton Mifflin Harcourt. March 24, 2020). Her website is www.bettyekearse.com. . 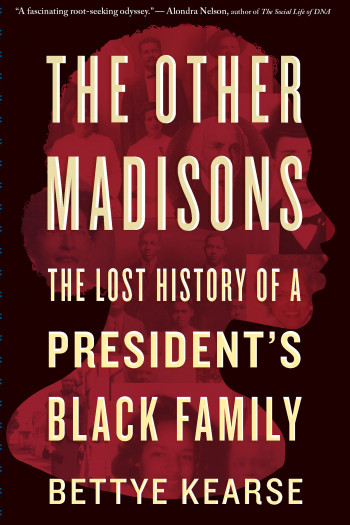 For more than 200 years, Bettye Kearse’s family credo “Always remember—you’re a Madison. You come from African slaves and a president” has served as a source of pride and inspiration. But Kearse doesn’t know why the credo should make her proud. For her, it resounds with the abuses of slavery. In 1990, when her mother turns over to her the old box of family memorabilia, Kearse becomes her family’s eighth-generation griotte, the oral historian. To confront the discomforting parts of her family’s story, she begins a journey of discovery—of her ancestors, her country, and herself. She travels to Lagos, Portugal, where the transatlantic slave trade began; to Ghana, West Africa, where her family’s first African ancestor in America, and their first griotte, was born; to Baltimore, Maryland, where a replica of a slave ship sits in a museum; to James Madison’s plantation where three generations of her family lived in bondage; and to Bastrop County, Texas, where her enslaved family resided when Emancipation came. Kearse learns that wherever African slaves once walked, history had tried to bury their footsteps and silence their voices. She also learns that slaves possessed hope and inner strength, by which they survived, and talents, by which they contributed mightily to America. Then they passed down those same qualities to their descendants, including those alive today. Kearse decides to give voice to the stolen Africans and to encourage African Americans to embrace their slave ancestry so that they, too, to contribute mightily to America.

Book Bubbles from The Other Madisons

In 1990, when my mother turned over to me the old cardboard of family memorablilia, I became the family oral historian and archivist, but decades before there was a box, there was a Bible. It was ordinary to look at, black except for the rough, tan leather showing through dry cracks along the edges of the binding and on the ridges around the faded gold letters that read Holy Bible. My grandfather's special feelings for the Holy Book had grown not just from devotion to Christian ideals, but from pride in the family documents he had painstakingly stored within its protective cover.

For more than 200 years, my family's credo, "Always remember--you're a Madison. You come from African slaves and a president," has been a source of inspiration and pride. But as I grew into adulthood, I began to question why, or even whether, the credo should make me proud.

While uncovering the lives of my enslaved ancestors, I grew close to Mandy, my family's first African ancestor in America. She came alive for me and conveyed what she wanted me to know and share about her capture and life as a slave. This book bubble is written in her words.

Without the ancient West African tradition of oral history, which survived the Middle Passage, I would not know that I am a descendant of the enslaved cook Coreen and her enslaver, and half-brother, President James Madison.

How do we come to interpret the past and what it means to us? Is it from what we read in history books or from what we celebrate (or revile) in our communities, or is it from the lessons we learn from our own elders and ancestors?

History is not just facts and dates. It is how we place ourselves in the world. It is enslaved people who, in every moment of their quiet, invisible lives, stole pieces of themselves from their masters in order to say, “I am.”

In 1991, an excavation crew for a new federal building in lower Manhattan unearthed several human remains. Land surveys from the 18th century revealed that the sight had been a cemetery for the thousands of deceased enslaved Africans who had built much of the city's infrastructure, including the wall that once defined Wall Street, and whose labor had made New York City astoundingly wealthy.

The Civil War and the Thirteenth Amendment to the Constitution ended the official and legal enslavement of African Americans in the United States, but the former slaves soon learned they had to fight in order to find true freedom. My great-grandfather Mack was not an exception.

Enslaved people possessed inner strength, a sense of hope, and values and beliefs the enabled them to endure enslavement. Above all, they had a strong sense of their humanity. They knew they were far more than someone's property.

My great-great-grandmother Elizabeth was married to President James Madison's grandson Emanuel. She endured enslavement through love of family and belief in God. She inspires me through the photo of her I carry in my wallet at all times.

In Search of My Enslaved Ancestors

When searching for evidence of my enslaved great-great-great-grandfather Jim, l encountered many obstacles, including or missing documents and people aiming to protect President Madison's image.

Searching for An Enslaved Ancestor

When I tried to find my enslaved ancestor Jim, President Madison's black son, I met many roadblocks. Slaves' names were often not recorded; fires, accidental or deliberate, in courthouses and in private homes, had destroyed whatever evidence once existed of the lives of many enslaved individuals; and people withheld information from me. I became discouraged, but I didn't give up.

Both the African village and the American slave community, each with a strong sense of kinship, were extended families.

"Visiting," A Euphemism for Rape

Two of my enslaved ancestors were raped by their enslavers, but the word "rape" has been avoided by generations of the women's descendants. The word evokes pain and shame. Many members of my family are more comfortable referring to the unwanted sexual encounters between the enslaving men and their enslaved women "visiting."

The National Great Blacks in Wax Museum in Baltimore, Maryland includes a realistic representation of a slave ship. It is a physically safe but emotionally traumatic place to visit. Though as many as fifty percent of the captives died during the Middle Passage. The survivers , including the children, must have had astounding inner strength.

After being kidnapped from villages in kingdoms throughout much of West and Central Africa and before being chained together in the bowels of wretched slave ships headed for Europe or across the Atlantic Ocean to the New World, African people were held for weeks, sometimes months, in forts that came to be called "castles."

A Visit to Lagos, Portugal

In 1441, "Prince Henry The Navigator," the governor of Lagos, Portugal, sent two ships to Africa to find ivory and gold. The explorers returned with twenty kidnapped Africans. Thus began the transatlantic slave trade, an event so monumental that in the history of the world nothing would come close to the destruction this dispersal of men, women, and children wrought on human freedom.

My ancestor Mandy, stolen from Ghana, lost everything she knew and everyone she loved, but the enslaved community in her new home in America embraced her.

An Experience with Racism

Over the years, I learned that slavery and racism had left an indelible imprint, a birthmark on America. It was up to me to deal with it.

My first train ride would become, like Mom’s had for her, the most vivid memory of my childhood. And it would reveal that escape from the mores of the South was not easy.

Children in the Jim Crow South experienced many first-hand lessons about racial segregation. It was enforced in all public places. Trains were not exempt.

When chosing a home for his family, my grandfather wanted one along the railroad tracks that ran through his small country town in Texas. Trains, he thought, carried physical and cultural connections to the broader world.

William Fauklner once famously said, "The past is never dead. It's not even past." For me, the past is alive in family memorablilia and the stories told from generation to generation. It is in my values and beliefs. The past is in how I try to live my life.

To tell our complete family histories, we must share the sorrows and joys, missteps and successes, flaws and strengths of our ancestors. These qualities and experiences, bad and good, help determine who we are.

Our credo, 'Always remember--you're a Madison. You come from African slaves and a president,' has guided my family, especially the griots and griottes (oral historians), for more than 200 years.

A Memory of Africa

As I wrote this book, Mandy, my family's first African ancestor in America, shared with me memories of her life, first in Africa, then in Virginia.

Each item in the box of family memorablia tells a story and reveals something about the person who once owned it.

Mandy was my family's first African ancestor in America. As I was researching and writing, I came to feel so close to her that knew what she wanted me to know and share about her. This was her first message to me.

Without the ancient West African tradition of oral history, I would not have known I am a descendent of a slave and President James Madison, and I would not have been able to write this book.